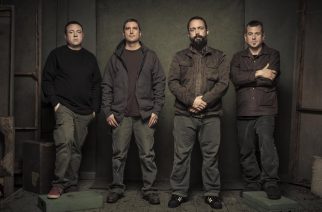 Maryland rockers Clutch have been forced to postpone the September tour dates of the ”Earth Rocker” North American Tour. This is due to a health issue with singer Neil Fallon. Most of the shows will be rescheduled and dates are listed below. Support on the rescheduled shows will remain the same and come from The Sword and Crobot. Tickets that were already purchased for the dates in September will be honored for the rescheduled dates in January.

Unfortunately one of the shows could not be rescheduled and has been cancelled. This is show is Vienna, WV on 9/21. The shows scheduled for South Burlington, VT on 9/24 and Long Island, NY on 9/27 will be rescheduled for a later date, please hold on to your tickets. Refunds for the West Virginia are available at point of purchase. The band will still be playing ”The Shindig” festival on September 14th in Baltimore, MD. All dates on the October – November leg of the tour will go on as scheduled and planned. The Hampton Beach, NH date originally in September is now scheduled for October 25. Unfortunately The Sword and Crobot will not be appearing on this new date in Hampton Beach, NH. News about support will be released in the coming weeks.

Clutch frontman Neil Fallon gave an update on his condition: