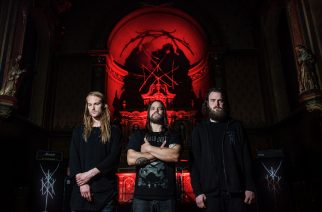 Formed in 2014 by members of renowned Belgian metal and hardcore acts such as Amenra, Hessian, Oathbreaker and Rise And Fall, Wiegedood recently inked a deal with Consouling Sounds (Amenra, Nadja, Snailking) for the release of their first full-length album “De Doden Hebben Het Goed”.

The trio offers a first listen to “De Doden Hebben Het Goed” with the album’s opening track “Svanesang”, which is now streaming via Cvlt Nation HERE.

“De Doden Hebben Het Goed” will be released on May 8th on LP/CD and Digital Download and pre-orders are now available via Consouling Sounds at the following location.

Comprised of Rise And Fall’s Wim on drums, Oathbreaker’s Gilles Demolder on guitar, and Amenra and Hessian’s Levy Seynaeve on guitar and vocals, Belgium’s Wiegendood formed in 2014 with the simple goal of playing an intense and atmospheric black metal that combined ferocious and crushing riffs with a somber and bleak atmosphere that comes from their admiration for the French black metal and acts like Wolves In The Throne Room.
Set for release on May 8th via Consouling Sounds, the band’s debut album “De Doden Hebben Het Goed” fluctuates between a relentless heaviness and unsettling, gloomy atmospheres and will surely become one of this year’s most talked-about black metal albums.