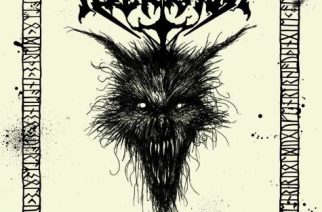 Savannah-based quintet KYLESA will release its new album, ”Ultraviolet”, on May 24 in Europe and May 28 in North America via Season Of Mist. The follow-up to ”Spiral Shadow” was recorded at The Jam Room in Columbia, South Carolina, with the band’s guitar player/songwriter and sought-after producer, Phillip Cope (BARONESS, BLACK TUSK), once again overseeing production.

”Quicksand”, a new song from the eleven-track album, is available now for streaming at SPIN.com.

”’Quicksand’ is a quick 2:35 of ghostly dreamdoom that joins the melodies of ’90s shoegaze with the churn of modern sludge and a riff straight from the Billy Corgan playbook,” says SPIN.com in a brief write-up accompanying the song stream, adding that the song is ”a muscular swirl that should please anyone who thought m b v didn’t have enough shouting.”

The cover artwork for ”Ultraviolet” was created by Sean Beaudry and can be seen below. Beaudry, a fellow Savannah resident, did the artwork for the band’s ”Time Will Fuse Its Worth” reissue.