”It’s been more than a decade it took us to compose, arrange, and make all the studio work for this long-anticipated album! Though it was more a fact of different things that caused this delay, such as the changes in lineup and the different personal activities that kept also the current lineup members busy. Not meaning that the band is not a priority, but hell, we are in Peru and have everything – mostly economic issues – against us! There were changes in the lineup, since Levifer was asked to leave. Eduardo ’Hellfucker’ Sanchez – he was also guitarist on the first Black Angel demo, and died August 2011 – joined the band immediately (2006) and also contributed to the compositions that you will hear on ESS, but due to work schedules and his reduced time to rehearse, he was also asked to leave. Then Beleth took the six strings and Necro takes the bass (2010), so during this period, we could finally finish the composition and arrangements of the album.

”We recorded everything in June 2012, and the early mixes were made by Beleth at some studio where he was working, during the next year. Still during this period of a year, the mix work was turning slow due to the fact that they were being made literally at almost 4000 meters high on the highlands of Peru, and we could not get together enough time to properly make the mix patiently. At this point in early 2014, Arthur Rizk – who had just worked on the last Inquisition album – contacted the band and gently offered us to give us a hand with the studio work, as he could handle the mix and had a much better studio and conditions to make this in Philadelphia. It was actually hard work of a month and a half, making written descriptions for the changes and suggestions, to each of the samplers sent by Arthur, but finally the results turned out really great and far much better than expected. We contacted Chase (Horval, Hells Headbangers label head) again and started to deal about the release of Goat Semen’s debut album through Hells Headbangers, and also we had the proposal of Finland’s Kvlt Records, who now will be responsible for the release of Ego Svm Satana in Finland, so now the album will be available from these two great labels for America and Europe.”

”There have been many things that happened to us during this long period of time. We have played in different places in South America, and have shared the stage with such cult acts like Vulcano, Mystifier, and Sabbat (Japan). We released some split vinyls and CDs as well as an advance tape with some early mix of some album songs, which got licensed also in Asia, USA, and Europe. But finally, we have the long-anticipated Ego Svm Satana album released, and I think this piece of monumental barbarism keeps the same path we started since the rehearsal tapes we unleashed at the very beginning of this fucking millennium! Hail the Goat!” 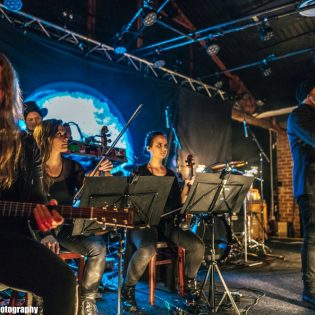