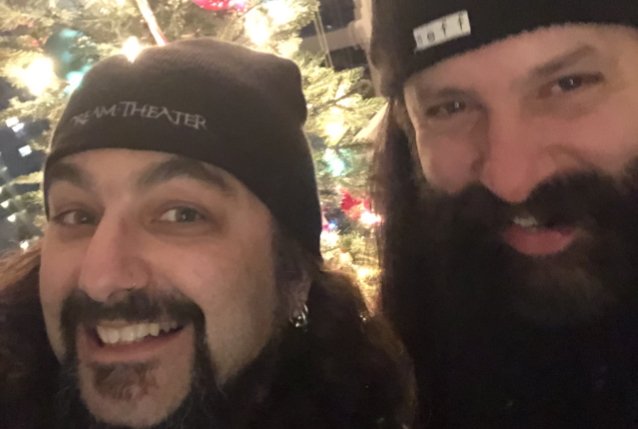 ”People are really happy about it. It’s funny — you know how things are online with social media and the different outlets that we put music and videos out, you try not to get sucked too much into the comment section. However, I do like to kind of scan that, and what I saw was people just very happy, not only that Mike and I were doing something musically together, which the main comments were mostly that, but just that they thought the [first] song [to be released from the album] was very positive and uplifting. And I love that.

”It was really great for me to have Mike play on the record. I hadn’t done anything musically with him since he left DREAM THEATER over 10 years ago. And it was really just fun, because it’s different when you’re in a band with somebody. Really, we grew up together — we met when we were 18. And you’re in business together. It’s different than when it’s, like, fast forward, now it’s, like, my friend is playing drums on my album. It was so easy going and so cool. He was able to come to my studio despite the pandemic situation on the East Coast in the U.S. It was safe for him to come to the studio — he doesn’t live that far from me. And he spent a week, and we had fun. And he did a killer job.

These songs take a lot of different skills, I think, as a drummer — some are uplifting and happy; some are metal; some take double-bass chops; some you’ve gotta do a shuffle; some are blues;some is Latin feel. And it’s just a testament to Mike’s playing — he knows how to do all that stuff. And he came in, totally easy going, did it. We had fun. And I’m really happy that he did it.”