”We are really sad to announce that Nils is no longer part of the Silver Bullet family. After seven years of playing together and after two great albums, it feels like you are losing a brother. There is absolutely no bad blood between us and in the end we all agreed that this is the right thing to do. We wish Nils everything good in life and we are sure that he will come to see our shows and maybe even rock the stage with us in the future.

The video for ’Forever Lost’ has been ready for some time already. We originally planned it to be released before we go on tour with Twilight Force, Majestica and Dragony, but the tour got cancelled, like everything else. This all gave this video a really special meaning and it now feels like a farewell to a dear friend. Huge thanks to everyone who was involved in making it!

Good news is that the band will go on stronger than ever. The process of finding a new lead singer has already started, so if you think that you have what it takes to be the new frontman or woman of Silver Bullet, don’t hesitate to contact us via email: band(at)silverbulletofficial.com.

The songwriting for our next album is going really well and it’s gonna be killer! When you hear it, you’ll instantly know it’s Silver Bullet but it will also bring some new elements into our arsenal. We can’t wait to play these songs live! We’ve spent a lot of time in the rehearsal room to make sure that when this cursed COVID-19 ends, we are more than ready to head on the road.

”Greetings to fans and other heavy music lovers!

Probably, we have all been faced with situations in life at a time, where difficult and even hard decisions have had to be made. Personally, I now had to make one of them. With heavy heart, but at the same time sure that my decision is a right one, I say goodbye to the Silver Bullet band, fans and my bandmates.

For more than seven years I got to be in the band, and those years can hold a lot of everything. Up- and downhills. Someone might find the decision stupid and hasty. After all, the band has a world-renowned second album, a valid recording and distribution agreement with the prestigious record company, and a European tour in the plans. However, I can assure you that the feeling of leaving has been shimmering inside me for a long, long time.

No drama of any kind is related to my departure. With Hannes, for example, there will certainly be collaboration in the future. For my part, I cannot say anything one particular reason for my departure. Personally, I enjoy that creative part the most in band activities. Making melodies and lyrics. From the fact that in a way, from scratch or something unfinished, is created something ready and, in one’s own opinion, good sounding. The recording process are ok too, but I started to experience touring as a distressing burden. Of course, that’s not always the case, but when you’re involved in a band with ambitious goals and a hard drive to get ahead in your career, it requires dedication and motivation from everyone. Personally, I eventually felt the gig was too much to perform, and the European tour, which was cancelled in May, did not increase the motivation either. Also, when I personally suffered from mild depression, I felt that it was better for band harmony and most of all for myself to step aside from the band.

However, I am not about to stop making music, singing and band activities. I don’t have any specific plans for the future, but that, too, feels like a kind of facilitating idea at the moment.

Thank you all for your support and encouragement. Thanks also to my bandmates for the past years. Hannes, Henkka, both Markuses, Patte and Ossi. Keep the flag high and get the job done.” 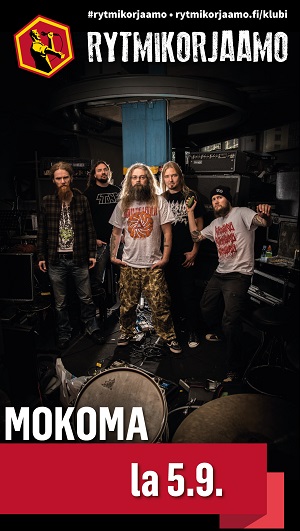