”Some people might not have expected us to come out with a new album so quickly but we already had a few songs written for this album by the summer of 2010.

”We’ve spent as much time writing this album as any of the others and I think we’re all the most proud we’ve ever been.

”’Monolith’ is the best representation of us as a band in terms of our diverse influences and stylistically it’s what we’ve always been aiming for. A mixture of thrash, big doomy riffs and dark atmospherics and ambience.

”Overall, ’Monolith’ has a darker vibe to anything we’ve done in the past, both lyrically and musically. It’s a concept album which is just something I like to help guide me writing the lyrics. I like the fact that I can write about personal issues but dress them up in a way that people might not know exactly how they relate to me (if at all in some instances).

”The idea for the concept was very loosely inspired by the Greek tale of Orpheus and Eurydice. It’s quite far fetched but it’s about this guy who loses his wife and tries to bring her back from underworld. This giant monolith starts to grow out of her tomb. The most prevalent theme beneath it all is sort of accepting that you might not be as nice a person as you once thought. It sounds really cheesy but everyone has a darker side to their personality in terms of being selfish, manipulative or dishonest.

”A lot of metal lyrics are always ’you’re this, you’re that, you suck’ and in a lot of cases it’s probably really hypocritical. Some of the lyrics on this album are about owning up to those flaws and almost reveling in it.

”Some parts of the album is us covering new ground but everything that people have come to love about our band is still present. It’s not necessarily a change in direction or something we’re moving more towards, it was just about making a unique vibe for this album as a whole. There’s a real urgency to a lot of this material and the really natural and honest production helps mirror that. We really wanted more of a ’live session’ feel. Both Romesh and Jens [Bogren; mastering] have done a great job in giving this album a unique sound. Too many bands these days rely on technology and it can just suck all the life and personality out of the music.” 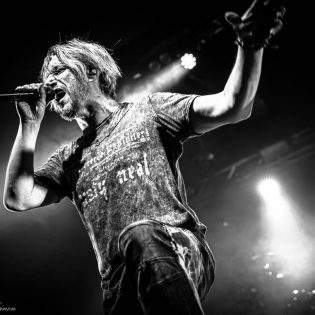