”Doug pretty much said he was sick of living in a van 90% of each year and that he wanted to live a more normal life. We can’t really blame him for that decision as there are times when I hate this shit too. It’s a real wake up call for anyone that thinks touring is ALL fun or that Terror as a band has it easy in any way. I honestly thought that Doug leaving may have been the end for us. Doug had been in the band for a very long time and I was starting to feel that all the line-up changes might start to make us look like a joke, but Nick and Martin sternly told me that this is NOT the end and that we have a lot more to accomplish. So, we pushed on as always. The only person we had even really talked about or spoke to about stepping up to fill the Big Man’s shoes was our friend Jordan from the now defunct Toronto HC band No Warning. For anyone that knows me or has read interviews with me you’ll know that I love No Warning and really all of Terror does. Jordan has proved to be an amazing song writer and dude so we are excited about this change. We’re going to do some touring with him to make sure he can handle our insanity and he’ll be the new guitarist if all fits how we think it will.” 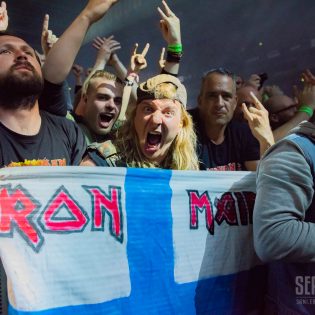