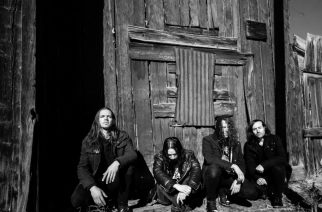 Hailing from deep within the snow-capped Rocky Mountains, Denver’s own Wayfarer conjure up vivid images of bleak landscapes and isolation with their adventurous and atmospheric soundscapes. Their 2014 debut album Children of the Iron Age was a special album indeed, and showed their potential as an adept young band. Borrowing from the pages of folk/black metal bands such as Moonsorrow, Wayfarer’s take on the genre is perhaps a bit more earthy and rich, which probably has something to do with the cascading mountains that blanket the Western slope of Colorado. After a grueling two year wait (for me, at least), Wayfarer are at last returning with their sophomore album, entitled Old Souls, and we are stoked to premiere the first taste of the album in ”All Lost in Aimless Chaos.” Listen to the song as you watch the animated interpretation of the album’s gorgeous cover art and get lost in the stark, yet beautiful sounds of Wayfarer.

Being a Colorado native myself, I can say with some confidence that this song is a hauntingly accurate sonic representation of being alone in the wilderness of the Rocky Mountains. It’s difficult to describe exactly why this blackened masterpiece captures the essence of the natural here in Colorado; perhaps it’s the rollercoaster of moods and emotions the band traverses through in its sorrowful melodies and earth-shaking grooves, or maybe it’s the natural, organic production courtesy of Denver producer-extraordinaire Dave Otero. Regardless of the reason, ”All Lost in Aimless Chaos” is a glimpse at what awaits on Old Souls, and trust me when I say that what awaits is nothing short of brilliant.

Old Souls will be released on June 17 via Prosthetic Records. Pre-order the physical album here, or pre-order it digitally on iTunes or Amazon, which includes an instant download of ”All Lost in Aimless Chaos.” The band is embarking on a tour of the Western U.S. at the end of June with fellow atmospheric black metallers Falls of Rauros. Dates for the trek can be found below.

Just Like Vinyl – ”Death Of The Sheep” Wayfarer – ”Jesus, Cast A Look On Me” Shadow Fall – ”A Public Execution (Live)” Tre Watson – ”…And the Horse you…